Somali police forces issued an statement on the tragic incident in Baidoa where security forces found the bodies of two young siblings in outskirts of the town on Thursday morning .

Police say suspects have been arrested in connection with the killings of the two siblings, in statement released on Thursday afternoon.

The police statement doesn’t mention the number of suspects but says investigation is underway.

The victims are the children of former lawmaker Aweys Abdullah.

The people of the town, shocked by this heinous act, gather at family’s home to comfort them at this difficulty time 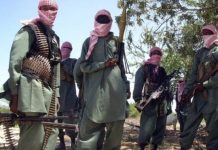